The Renault 5 Turbo II is a rare sight, even at historic car shows but remains an indelible memory of one of the 80's all conquering Gruppe B cars.
The Renault 5 Turbo or R5 Turbo I as it later became known, was launched by Renault at the Brussels Motor Show in January 1980 to an enthusiastic press. The Group B Renault 5T was primarily designed for rallying at first, but the intention was there to also make a road legal version available. Once the initial homologation models required for racing had been produced, a second version named the Turbo 2 was introduced. This used more stock Renault 5 parts, replacing many lighter (but expensive to produce for small production batches) alloy components in the original 5 Turbo.[1] version, which had included suspension arms & roof skin. The Turbo 2 was less expensive to buy new as a result, whilst still offering essentially the same levels of performance.

This example was originally supplied new to Japan where we bought it in 2010. In order to explain it's rust free condition, it's important to understand that in Japan, all roads are drained of water through the use of efficient concrete storm ditches (there are heavy rains at times from typhoons and Japan is 70% mountain terrain with forest, so safety is paramount). This means there is no mud & debris washed onto roads during storms, unlike what is commonly seen in Europe. Roads in Japan are also probably the best maintained worldwide, without potholes, mostly smooth surfaces with good grip, etc.

No salt, grit or sand is laid on surfaces over winters in the most populated areas, as urban towns & cities are invariably built on lower plains, due to risk of earthquakes and consequential landslides that would be risked if building on mountain areas. Because roads are well designed and maintained in Japan, this means undersides of Japanese cars don't tend to be covered in electrolytic dirt and so when the underside gets wet in rain corrosion is much less likely to develop. Essentially the cars are washed by clean rain in Japan if they get wet and explains why cars used in Japan are typically completely rust free.

In keeping with the history of it's life in Japan this example, although rust proofed as new from the factory there remains no corrosion at all to the underside. As a car with some 58,000km when we bought it in 2010 it had been kept very original, but over the last years of it's life with it's owner hadn't be used due to illness. Intending to keep this rare car for ourselves and due to not having any access to parts in Japan, we sent it to the UK. The first thing we did was to completely replace the entire fuel system or have components overhauled where new parts are no longer available. The fuel tanks were removed and professionally cleaned and new components fitted, from pumps, custom made hoses, AN inline filters, warm up regulator right down to the tachometric relay.
We renewed all the ignition service items, leads, and also replaced old hoses with silicone replacements. Needless to say the entire car was checked over mechanically and extensively serviced, but it's notable that there was nothing we encountered that was seized at all, no broken bolts, etc. Even the brake calipers, although rebuilt, weren't corroded!
With the engine and mechanicals taken care of, fueling & boost set to factory specification it now started on the first turn of the key.
It's clear to see the original bodywork has been beautifully preserved. Bodywork & paint is all original and there is even an original but slightly faded sticker in the driver's door with a number stamped on that shows such originality. This car has never been in an accident nor had rust repairs!
Seats, steering wheel are original . Carpets had become stained and aged and like all Turbo II's the head lining had long since disintegrated, so we had new matching colour carpet & headlining professionally trimmed & fitted. The car came to us with the Devil exhaust fitted and Panasport 2 piece split rim wheels, but we felt it looked much better on Minilites of special deep-dish design, specified precisely for the Turbo II, so a new set were sourced whilst still available. Other modifications we've fitted have been a new fan for the front mounted radiator (With fan over-ride switch), a boost gauge to ensure it's running at correct (0.85 bar) boost and a fire extinguisher.
For the last year or so, it's been UK registered & stored in a secure heated facility in Leicestershire when not in use but driven (sensibly) at least once a month in order to keep it in fine fettle, although it's not been used when there is salt on roads, nor rain.

We were forewarned that this cheeky Renault would get under our skin and that it most certainly has done! to the extent that we've become quite attached to it.
This example also benefits from a full mechanical health check at John Price Rallying and they confirmed it’s excellent overall condition and this is a rare late model homologation  version of the turbo2.

Now stored in dehumidified and heated storage this amazing machine awaits it’s new owner.Please contact us to arrange a viewing. 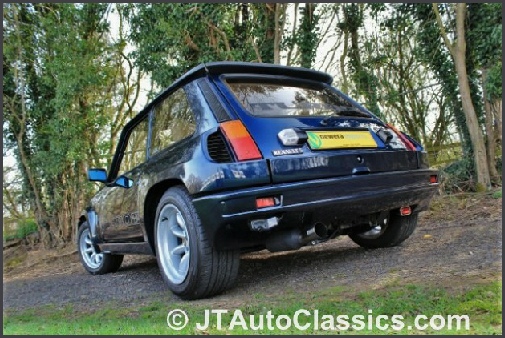